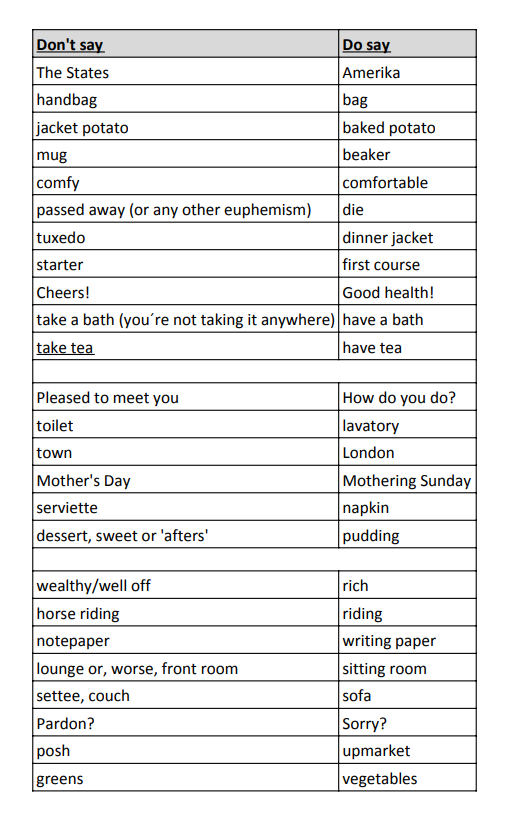 Honestly, it was not really easy to find literature dealing with etiquette in Africa. Nevertheless, I managed to find an extract by a British writer William Hanson, which is and is not about etiquette, but I thought it was interesting so I decided to share it with you. The extract explains what English words you should use if you want to make it apparent at first sight that you are a member of higher society and what words automatically place you one class lower. As the author himself puts it, if you wish to differentiate yourself from the so-called hoi polloi, which means something like ordinary people in Czech, you should definitely use the words he recommends in the “do say” column, while you should better forget those listed in the “don’t say” column.

According to him, one of the most significant indicators of which social class you belong to is what translation you use for the word toilet. The middle class prefers the word “loo”, a Brit from the highest society chooses nothing but “lavatory”, while the others say “restroom”. The author asks a question of whether we go to the toilet to have a rest so that there is a reason for using the word “restroom”. Frankly, and I do not mean to offend anybody, but I’ve met a few men in my life, and I must say with clear conscience that apart from the primary reason, each of them went to the restroom to have a rest as well. Sometimes I am not sure, which reason for spending so much time there was the main one for them. Well, we are the Czechs so we may have it all different here and maybe the British men spend just a while there and then they rush again to fulfil their work or household duties. Anyway, when you excuse yourself in the company of British people, remember these lines, and if you want to appear as a sir or lady, then never use “restroom” and do not spend too much time at the toilet.

Do not forget though, that if you are in the USA for instance, things are different again. A translator I work with commented on this article by saying that the word “restroom(s)” is very common for him as an American and that it is widely used on public buildings, shopping centres and at the airports to show the direction. He says that in the USA another favourite expression for this is “toilets” and then just pictograms and the words MEN, WOMEN. Colloquially or when you are at somebody’s home, you say “bathroom”. “May I use your bathroom?” He wouldn’t say a “restroom”. If he needed to go to the toilet at the airport, in a library, restaurant, etc., he would say “I’ll just use the bathroom (or restroom)”. In the USA the expression “lavatory” is rather used in connection with a toilet in airplanes. In decent company, you will commonly come across terms like “restroom”, “men’s room”, and sometimes also “facilities”.

Therefore, do not take the statement of the British author as a fixed law, but as a recommendation. We know that everything, even a language, varies depending on location and is subject to fashion trends just like everything around us. The publication in which the writer printed these lines has been on the shelves of bookshops for a year and a half.

Finally, and just for fun, do you know that the acronym WC, which we all commonly use, comes from the English “water closet” invented by a certain Thomas Crapper? And that the symbol 00 used for marking toilets, which started to be used in the 19th century, is said to have originated because the toilet was the first room in German hotels at that time, which you had to pass on your way from the stairs to the rooms, and also where the numbering of rooms began? Therefore, toilets had number “00” and only then did room No. “01” follow.

← Afternoon Tea for Mother’s Day Are You an Expert on Etiquette? →